by info@japonalia.com in Culture, Warrior 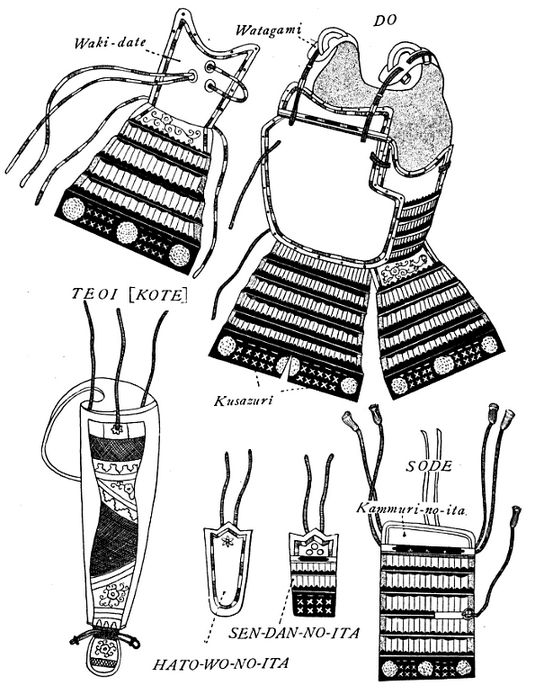 In this section the various yoroi parts, including the Dou, Kote, Sode, Waidate, Haidate and Suneate—known collectively as Rokugu, which means “Six Articles of Arms”—will be explored in detail along with related componets. Following that, auxiliary armor will also be touched upon.

DOU: The main body of the armor, this is a panel of lamellar boards laced together with silk and leather cords.

WAIDATE: This piece, which can be considered another part of the dou but was typically secured prior to wearing it, is designed to protect the wearer’s right side. The upper part consists of a leather-covered iron plate with a lamellar bottom part.

TSURUBASHIRI: This leather panel, which covers the front of the torso plate, is meant to prevent the bowstrings from snagging on the scales of the armor. This part is frequently decorated with beautiful patterns.

KUSAZURI: This is the plate skirt that protects the lower part of the body as well as the upper leg. It is laced together to the upper plates. For the armor made during the Heian and Kamakura periods, the skirt was made with both leather and iron. However, post-Muromachi Period armor saw a shift mainly to iron, with some being made from roasted leather.

SODE: Made from the same basic materials as the Kusazuri, These two shoulder plates are attached to the Dou with Watagami (shoulder straps, some made from leather before the Muromachi period and iron after that).

Not surprisingly, some samurai armor parts were actually crafted together. During the late 16th century, the co-designed Sode and Kusazuri formed a matching set with the same patterns.

KOTE:  These are arm-length glove sleeves reaching clear to the shoulder. They are typically created from cloth such as silk brocade, covered with metal plates, and connected with Kusari (chainmail). Another type of protection is the Han Kote (Kote Gauntlet) which only covers the forearms. Early samurai would only use Kote on the left arm, which gave the right one freedom for archery; in the late 1100s, matching sleeves began to appear.

SUNEATE: These shin guards, vertical plates which first appeared during the 12th century, are connected by either hinges or Kusari chainmail. They are tied to the calf via cloth straps which are also attached to a cloth backing. The shin guards, which may actually be all chainmail in certain instances, are composed primarily of iron or leather. 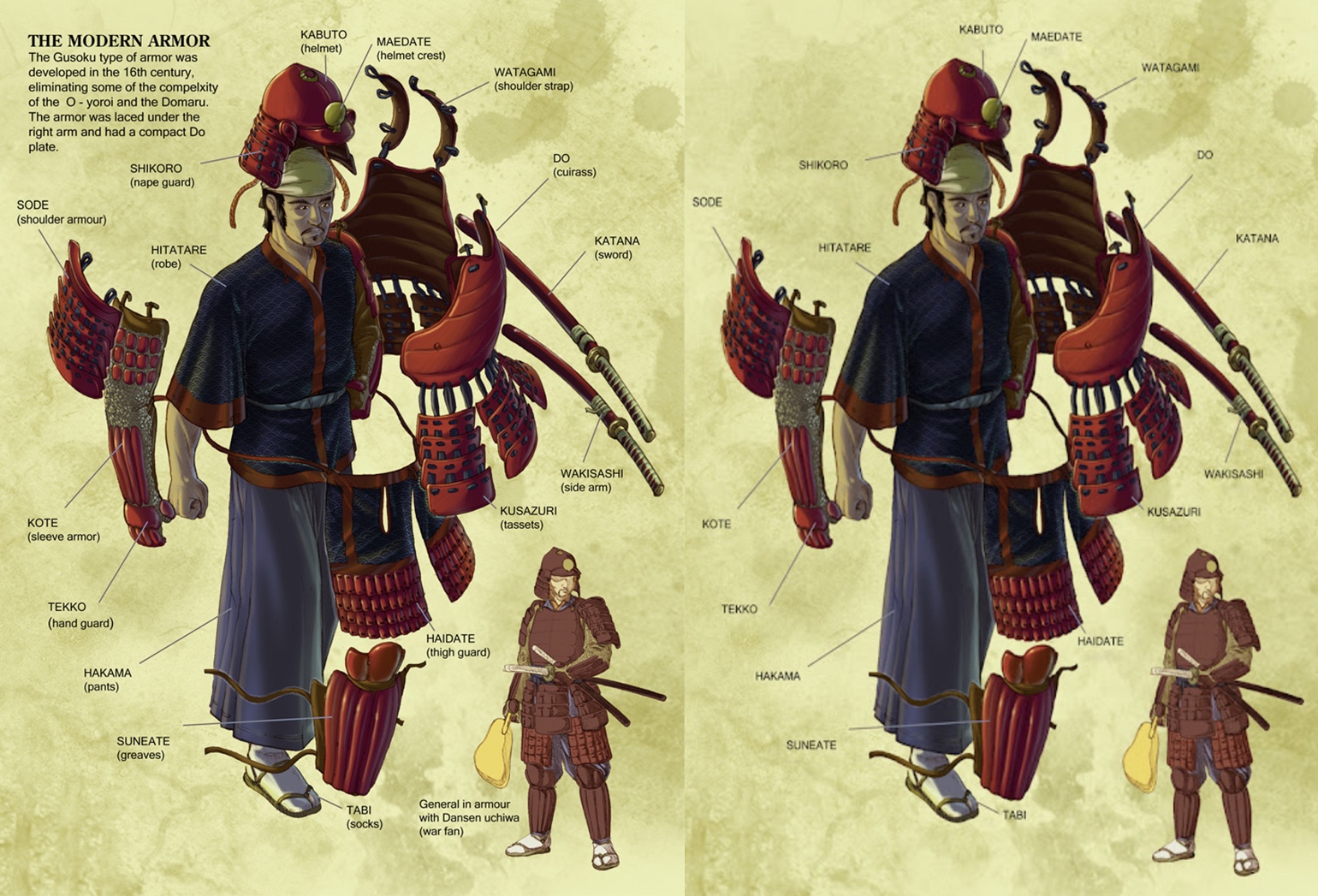 Like the aforementioned Yoroi parts, the Kote and Suneate were also crafted together as a matching set.

HAIDATE: These are the thigh guards. They are a late addition to Japanese armor, not making their appearance until the 13th Century. They were made with a mixture of textile material and metal, attached to the cloth and held together by chainmail. Despite the fact that the Haidate can be seen in most suits of samurai armor, it is believed that they were not actually used very frequently due to being uncomfortable and cumbersome.

The AGEMAKI bow, a cord suspended from a ring on the upper plate, can be found at the rear of the armor. This bow, which was originally designed to keep all the parts of the armor together, became merely decorative in later years.

The KABUTO and MENGU, the helmet and face mask respectively, will be covered extensively in future articles. 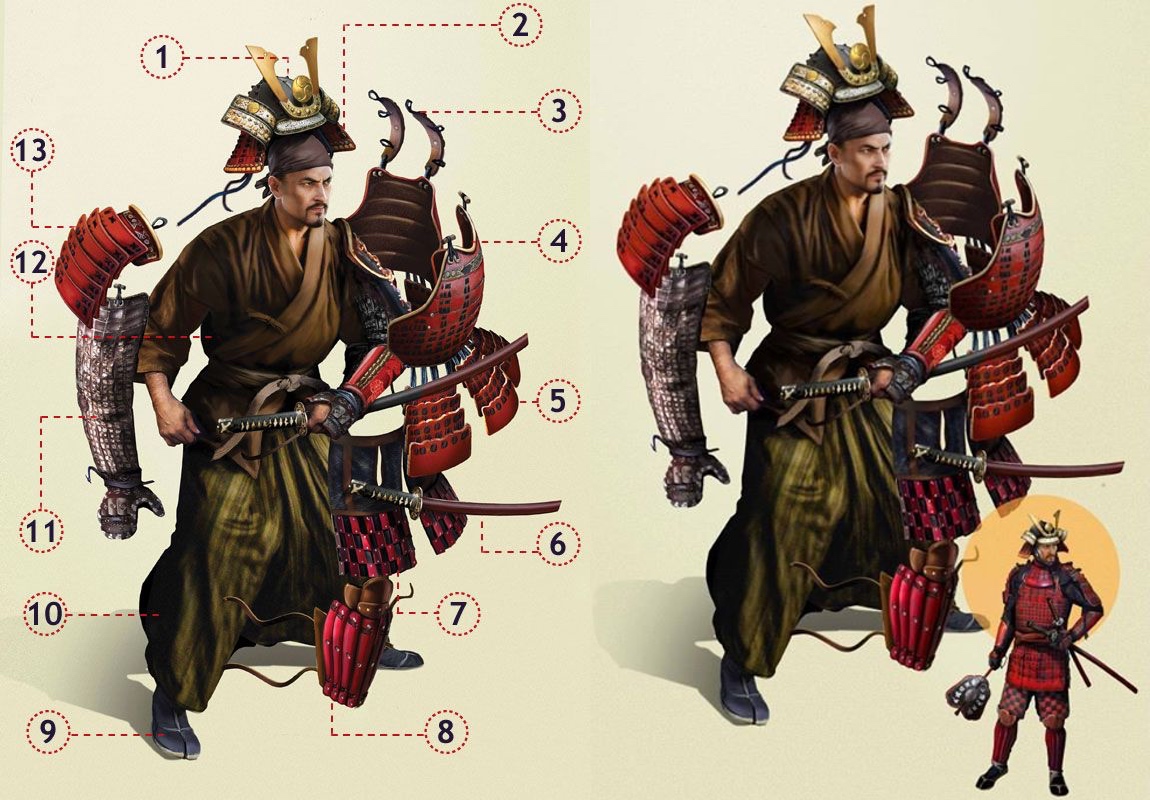 Of course, the incredible array of samurai armor parts does not stop at the larger pieces; whether for battle or display, the auxiliary parts matter just as much. Here is a list of those essential pieces that not only provide the perfect finishing flourish, but also ensure that the armor is historically accurate down to the very last detail.

NODOWA (Neck protector): Fastened at the back of the neck, this part is designed to protect the throat. There are several variations; the MEGURIWA, which attached with hooks, and the ERIWA, which used a buckle, are two examples.

WAKIBIKI (Armpit protectors): Though they may be composed of a single piece of hardened leather or even iron, these protectors are most typically seen as rectangular textiles, sewn to the cloth backing and covered in armor. Hanging from the shoulders, they are designed to protect the exposed armpit area and can either be worn inside or outside the main body of the armor.

MANJU NO WA: This is a compact vest featuring small connectors that go under the armpit area from the back and attach in the front. Made up of KATA-ATE (shoulder pads), YERI-MAWARI (collar) and Wakibiki, this vest serves to protect the upper chest area. Before being sewn in to a backing of textile, it may be covered with Kikko (brigandine), Karuta (small armor plates) or Kusari (chain armor).

KOGAKE (Armored foot coverings): These foot protectors may be designed either as a simple metal surface worn over the foot or as armored tabi shoes, made of metal plates sewn to a deerskin foundation and a slightly heavier leather sole.

TATE-ERI: (Shoulder Pillow/Padded Collar): This standing collar, designed specifically to shield the neck via Kikko armor,  sits on a pad attached to the shoulders. 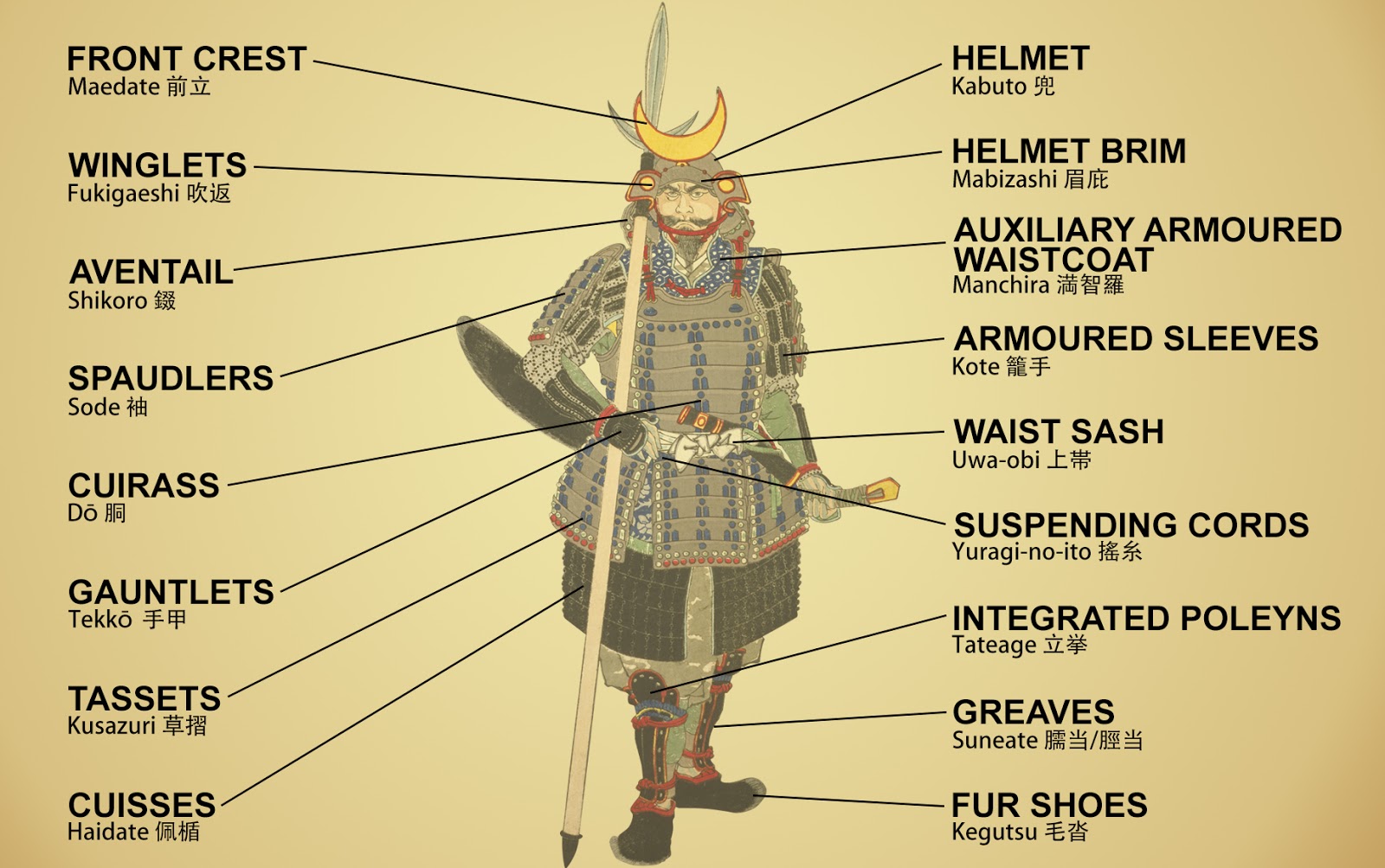